Each and every time we learn of a teacher, activist, scholar, artist, professor, organizer, coordinator, or facilitator who is or has used The Panza Monologues as a teaching tool, we are extremely gratified and thankful. Our second edition of the play in publication was specifically conceived of and designed to help facilitate its use in classrooms of all kinds. We included numerous kinds of materials to accompany the script in order to inspire its use as a wide reaching teaching tool.

Our occasional blog series - "Pedagogy of the Panza" - celebrates and profiles teachers and their innovative instruction using The Panza Monologues, Second Edition. This series features posts that showcase important, determined, and ingenious teachers of all kinds who are taking our work to the next level of its manifestation. Are you using The Panza Monologues, Second Edition in your classroom? We’d love to hear your story – contact us! panzapower@gmail.com 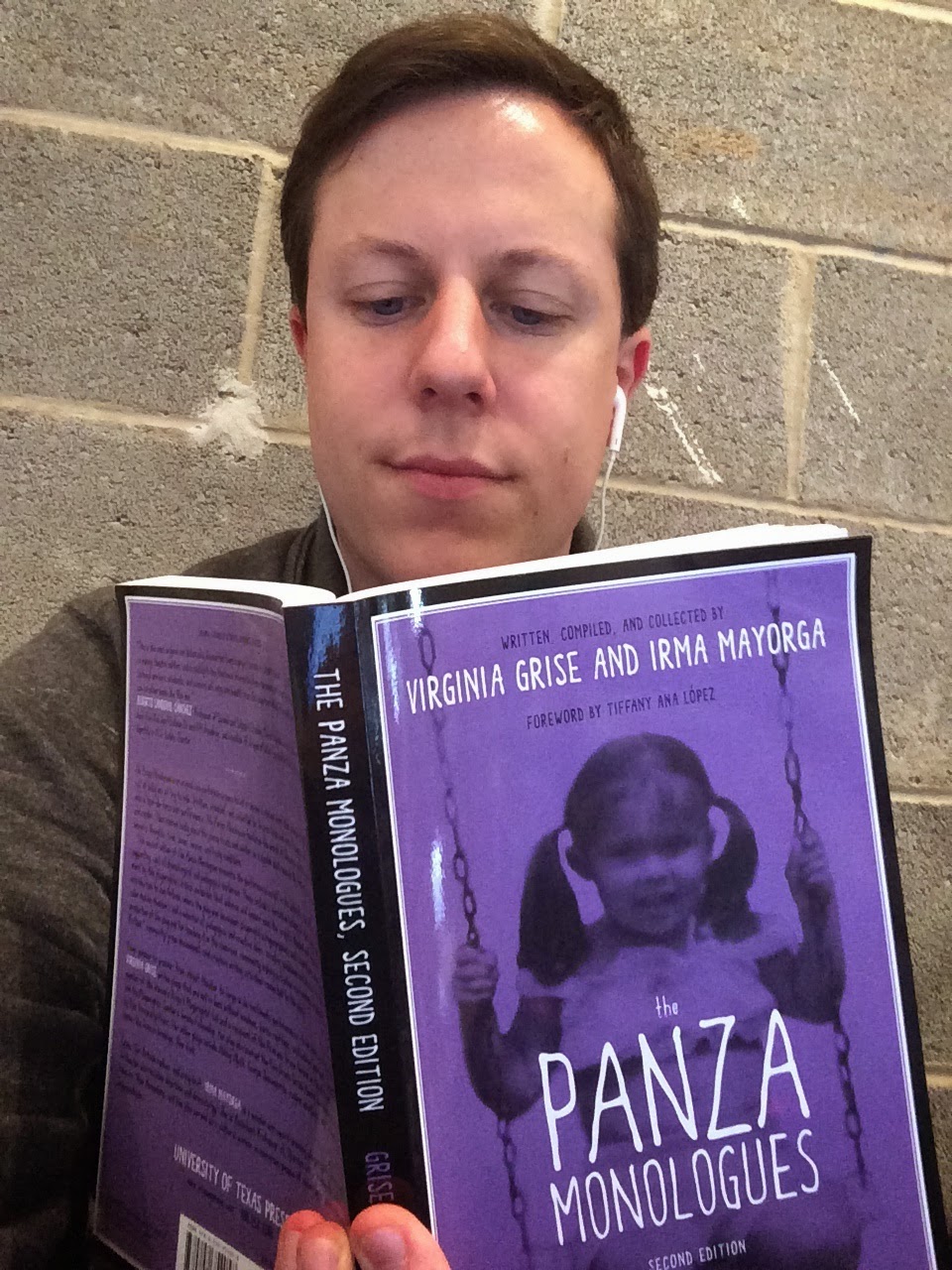 Trevor Boffone is a Ph.D. candidate in the Department of Hispanic Studies at the University of Houston. He researches the intersections of gender, sexuality, and space in Chican@ and Latin@ Teatro and cultural production. His dissertation research is a study of theater and performance in East Los Angeles, focusing primarily on Josefina López’s role as a playwright, mentor, and community leader in Boyle Heights at CASA 0101 Theater. He has published and presented original research on Chicana Feminist Teatro, the body in performance, Queer Latinidad, as well as the theater of Adelina Anthony, Nilo Cruz, Virginia Grise, Josefina López, Cherríe Moraga, Monica Palacios, Carmen Peláez, and Estela Portillo-Trambley. He recently served as a Research Fellow at LLILAS Benson Latin American Studies and Collections for his project Bridging Women in Mexican-American Theater from Villalongín to Tafolla (1848-2014).

Where do you teach?
University of Houston in the Department of Hispanic Studies

In what class/type of class did you use The Panza Monologues in?
I used The Panza Monologues for a guest lecture in Andrew Joseph Pegoda’s Texas History class at Alvin Community College. I normally teach Spanish language courses so I jumped at the opportunity to teach Teatro.

Why did you choose to teach The Panza Monologues in your class?
Given that I was teaching students who had never come in contact with Chican@/Latin@ Teatro before, I wanted to give them a glimpse into the type of work being done today. I wanted them to recognize that this is a living and breathing movement, one that is still actively being shaped. I chose The Panza Monologues because I thought students would recognize the different themes that the play presents. Even one older man claimed that he had used pliers to pull up his zipper on more than one occasion! The monologues offered a nice balance between comedy, drama, activism, feminism, theory, etc. Therefore, I was able to introduce and tackle many key themes in a short period of time and hopefully motivate the students to seek out more information.

How did you teach The Panza Monologues (any fun or meaningful activities or panza teaching tools you want to share)?
Since I was teaching in a history course, I helped students make connections between the play and how history is (re)constructed. In particular, I wanted students to consider how contemporary works like The Panza Monologues alter and (re)construct Tejan@ memory.

I began the lesson by discussing San Antonio’s role as an important city for culture, history, and theater since the early 1900s (and before). I gave students a brief introduction to itinerant and resident companies that performed in San Antonio, focusing on the Carlos Villalongín Dramatic Company, which took permanent residence in San Antonio in 1910 due to the Mexican Revolution. San Antonio as a hotbed of Mexican/Mexican-American theatrical activity throughout the first half of the 20th century is important. By offering a glimpse into the work done by mujeres such as Concepción Hérnandez, Virginia Fábregas, Josefina Niggli, Lydia Mendoza, La ChataNoloesca (Beatriz Escalona), we briefly discussed what it meant for women to be the leading performers at this time. In this way, I demonstrated how Grise and Mayorga’s work fits within a continuum of Latina theater in Tejas that centers on women as principal performers occupying public space(s).

Once we arrived at The Panza Monologues, the focus shifted to the different historical markers in the text as well as how the panza is used to tell deeper stories about the Latin@ community in San Antonio. For instance, using “My Sister’s Panza” and “Las Noticias,” I guided students on a discussion about the intersections of race, class, age, gender, and obesity while also emphasizing the importance of food in culture.

Why is The Panza Monologues important to your field of study? What conversations did the book raise?
Even though I was teaching in a history course, the students were open-minded about how theatre can be used as a lens through which to view history. While not history per se, theater is a mirror that allows us to reflect on the past and remember or forget certain things. Just like film, literature, and/or music, theater  should be given more weight in how it constructs cultural and historical memory.

For example, “The International Panza” allowed us to consider how Tejan@ memory is created and maintained. The shouts of Chicana, Aztlán, Broken Treaties, Border Crossing, and the Mexican-American War, La Migra, and the Treaty of Guadalupe facilitated a dialogue about how and why these different things are still pertinent to Chican@ and Latin@ identity in Tejas. Many of the students were familiar with these terms/ideas, but weren’t sure exactly how they were connected or how these legacies still affect Chican@ and Latin@ identity and experience in contemporary Tejas.

What did you learn about your teaching or about your students from teaching The Panza Monologues?
I was nervous beforehand that students wouldn’t embrace theater as a tool to study history, but I was surprised at how open-minded they were. Some even commented that they didn’t quite see the point, but by the end of the class, they were asking for more plays and resources. Many students didn’t realize that Latin@ theater is alive and well in Tejas. I think that by choosing to teach such a contemporary piece, students left the class recognizing that Tejan@ culture is thriving and accessible to them if they choose to seek it out.

Posted by The Panza Monologues at 12:10 PM