Pedagogy of the Panza: Panza with Profes 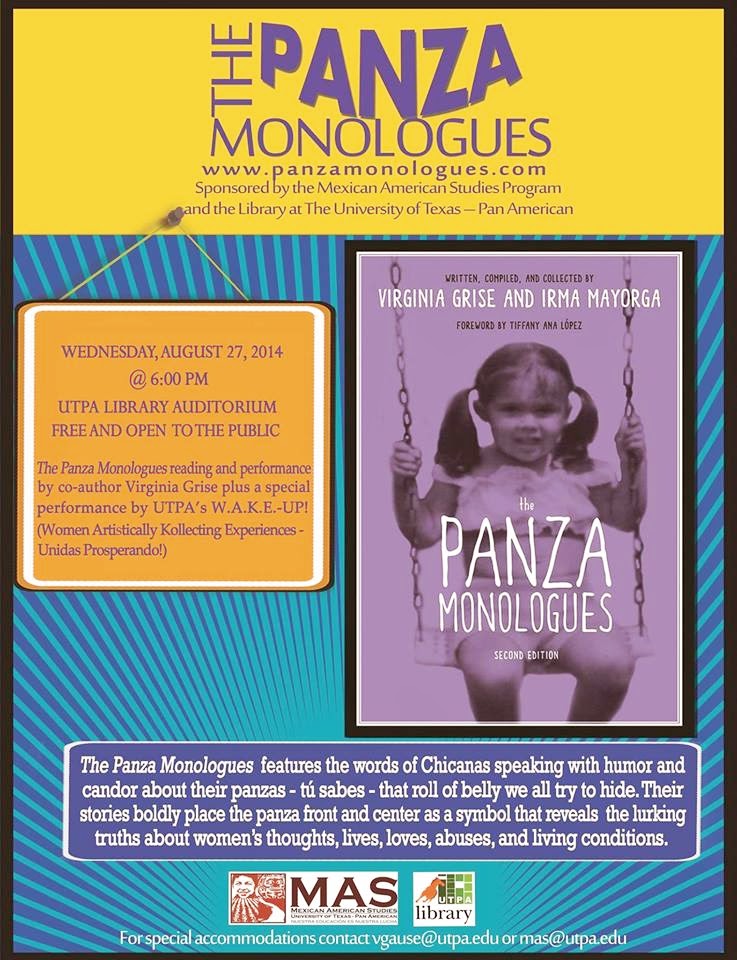 On Sunday, August 25th, Virginia Grise will begin rolling through South Tejas on the "Some Like it Hot - South Texas Panza Monologues Book Tour." The tour promises to spread panza positivity and power from South Padre Island to the University of Texas, Pan American (see end of post for the tour schedule).

However, before V's red hot reports from the South Tejas tour begin, I wanted to share some reflections about a unique staging of The Panza Monologues that occurred earlier this summer at the Association for Theater in Higher Education's (ATHE) annual conference.

The last weekend in July, ATHE held their annual conference in Scottsdale, Arizona. This association is comprised of roughly 1500 members who are, in large part, profes who teach, make, and study theater at the college and grad school level.

At the profes' annual ATHE convening, they have a chance to dialogue and exchange, enjoy fellowship and intellectual stimulation, meet new people and ideas, and overall, enjoy thinking about theater and education with colleagues from across the U.S. It's a theater profe geek out session of the best kind. As a theater profe myself, I have been a member of this org since around 1996 and consider it my intellectual home for theater studies.

Although the National Council of La Raza and many other Latina/o orgs have called off their boycotts against the State of Arizona [see more HERE] - boycotts that began in response to a long series of hostile [meaning racist] Arizona immigration laws (not the least of which is SB 1070, the law that encourages racial profiling) - the state remains a bitter site for Latina/os: a place to avoid, to go around, and to resist actively as a matter of solidarity against the egregious legislation that continues to be implemented by the state.

And if that isn't enough, let's also not forget Arizona passed into law HB 2281, a mandate where books that offer critical interventions and rearticulations of dominant U.S. history, as well as cogent breakdowns about discrimination based on race, gender, ethnic identity, and sexuality in the U.S., have been removed from Arizona public secondary schools because they spread "dangerous ideas." Ideas like social justice, like gender equality, like describing the reality of the lived conditions people of color, women, queer people, children and youth, and all other marginalized communities have resisted and survived in the U.S. Yeah, those books. They are now gone from classrooms, which is most definitely not enacting Panza Positive Policies. (To see the list of books removed from Arizona high school classrooms, go HERE.)


In light of these troubling circumstances (and there are others...), it was with special attention and care that ATHE constructed its annual conference for Arizona. The organization sought to recognize what we were stepping into while also working hard to honor the ongoing work of those whom we were visiting with for a time.

So, for example, although he had already been identified to receive recognition, this past July was the year that legendary theater artist Luis Valdez attended the conference to receive one of ATHE’s highest awards, the Ellen Stewart Career Achievement Award for Professional Theatre, which recognized his unmatched contributions to the political and aesthetic shape of U.S. American theater. If that wasn't thrilling enough, playwright, performer, and itinerate community organizer Luis Alfaro addressed the entire ATHE membership as the conference’s keynote speaker for 2014. Luis designed his keynote as a “conversation” with Dr. Tiffany Ana Lopez (who, we might add, wrote the “Forward” for The Panza Monologues, Second Edition!), and his remarks offered important ideas about building community, the current climate of Latina/o theater making, and advice on supporting artists. He also scattered phenomenal snippets of performances from his huge catalogue of work in his remarks, which delighted and, frankly, deeply moved all those gathered.

"The de facto banning of novels and plays from the Tucson Unified School District in 2012 marks the continuous struggle to define 'America' through acts that divide and silence. 'Intimate Acts' offers a space to connect, reflect, and speak out through the reading of work at the edges of 'acceptability.' Through  the shared reading of excerpts from the plays of Amiri Baraka, Cherríe Moraga, Luis Valdez, Virginia Grise and Irma Mayorga, among others, we offer an intimate gathering space for making meaning collectively."

Now, although The Panza Monologues is, of course, very dear to me in any performance incarnation, I was simply too busy to help put up this staged reading event for ATHE 2014, as I told the curatorial committee when they contacted me. "No problem," they said with generous understanding. Instead, they turned to ATHE's very talented pool of profes (many of whom are professional theater artists) to stage the reading. This meant that when I arrived to my seat at the reading event, I had no idea what would occur. I had entered a brand new phase of my relationship with The Panza Monologues: that of spectator.

Because I’ve directed the play with Virginia for so long now, I've grown used to The Panza Monologues looking a certain way, feeling a certain way. I know its rhythms intimately and have a certain take on the material. Together Virginia and I have staged it in numerous venues with numerous changes over the years. But, in the hands of a new set of theater artists, I never could have imagined how startling and, indeed, necessary a new take on the piece could be. Talented and dedicated folks were taking care of The Panza Monologues with as much commitment and love as Virginia and I have always attempted to do. "A panza story is a sacred story."

For this special performance event of "dangerous plays," The Panza Monologues went last in the evening’s series of readings, and as a friend of mine noted, the panza “brought down the house.”

Brilliant NYC-based director/scholar/profe Jason Ramirez (who took up the task of staging The Panza for this reading) reconceived the work for a cast of four, thereby making the staging multi-voiced, sexed, and gendered. To make the piece playable for four actors, Jason also reimagined the texture of our text. This included reconceptualizing the piece’s “Prologue,” retuning "Historia" (que viva las chichis!), and the play's final section “Panza Girl Manifesto” so that these large pieces were spread among four voices/actors/identities. The result was something I never could have imagined for our dear panza...the result was vibrant, poignant, and crackling with life.

Jason also rethought how to stage the piece physically - how to maneuver it among four bodies. The audience sat “in the round” or almost on all sides of a large, cleared playing area. The actors placed four music stands in this clearing, roughly forming a square in the circle of audience around them. The music stands faced inwards – away from the audience, so that the actors faced each other across the “corners” of the “square” they and their music stands made. When they embarked on a new monologue or part of the play, they rotated around the music stands, addressing the room from new locations.

After entering the playing area at the top of the staged reading, the actors/profes - Patricia Herrera, Solimar Otero, Kimberly Ramirez, and Aaron C. Thomas - tossed the “Prologue” between them and across the space, filling it with their telling, weaving their voices and the “Prologue's’” thoughts among them. The multivocality of this new staging was captivating. And, having the presence of a male voice in the thoughts that are addressed in the "Prologue's" ideas proved deeply affecting and illuminating. "Men" from all points of the gender spectrum have always articulated their identifications with The Panza Monologues to Virginia and I throughout this past decade but to see an identifiably male body participate in helping to voice the call of The Panza Monologues’  “Prologue” aloud...truly revelatory.

Patricia, Solimar, Kimberly, and Aaron were simply brilliant. I took the photos that are spread here throughout this post, which capture just a glimmer of the energy from the reading. But at a certain point, I simply stopped taking photos and just sat on the edge of my seat listening to the piece, to the other audience members in the room also listening intently, laughing, like them, in recognition and empathy. The staged reading reduced me to amazement, filled me with humility.

Although they had committed to the performance, and prepared for the reading in their homes, these four actor/profes plus Jason their director did not rehearse together until they hit the ground in Arizona, about two days before their performance, which made their staging all the more incredible and also displayed the depth of their abilities. Solimar Otero offered a stirring rendition of “Praying” that scored the anguish of domestic abuse into those assembled. Patricia Herrera (also a playwright) and Solimar offered a loving rendition of "Panza to Panza" that split the piece between their two voices. Aaron C. Thomas wound his way through a hilarious version of “Sucking it In,” even with his svelte body. Likewise, flaca Kimberly Ramirez rallied us all with her reading of “Political Panza,” shouting to the room and to the State of Arizona that we all needed “panza positive policies, now!”

As I sat watching this innovative staging, my thoughts couldn't help but recall the history of The Panza Monologues and its singular journey. My thoughts flew to Virginia, who I wished was there with me to see what our Panza was put in motion to do by the people performing it anew in front of me. And, yes, after the event someone came up - as people always do - and asked if they could do the Panza too. Yes, I said. Yes, I'd love to see the Panza done again and again with this much care and urgency for its future manifestations, for the future audiences who need its stories.

And I thought, she doesn't need us anymore, not really. She's a book. She's a DVD. She's something far beyond Virginia and myself, which is what we always intended.

What she needs is you!

*
"Some Like it Hot - South Texas Panza Monologues Book Tour"

Know anyone in these cities? Tell them to come show us their panzas! South Texas Raza don't let us down!

Posted by The Panza Monologues at 9:39 PM No comments: