Each and every time we learn of a teacher, activist, scholar, artist, professor, organizer, coordinator, or facilitator who is or has used The Panza Monologues as a teaching tool, we are extremely gratified and thankful. Our second edition of the play in publication was specifically conceived of and designed to help facilitate its use in classrooms of all kinds. In the second edition, we specifically included numerous kinds of materials to accompany the script in order to inspire its use as a wide-reaching teaching tool.

Our blog series "Pedagogy of the Panza" celebrates and profiles teachers and their innovative instruction using The Panza Monologues, Second Edition. These posts showcase important, determined, and ingenious teachers of all kinds who are taking our work to the next level of its manifestation. Are you using The Panza Monologues, Second Edition in your classroom? We’d love to hear your story – contact us! panzapower@gmail.com

Where do you teach?
I am an Assistant Professor of English at Texas A&M University-San Antonio.

In what class/type of class did you use The Panza Monologues?
Over the years, I have taught The Panza Monologues on several occasions. First, in a Multiethnic Literature of the United States – an upper division survey. Next, I taught the play in an Introduction to Advanced Literature course which I subtitled Chicana/o literature and culture. I then assigned the material in a graduate class called Tejan@ Narratives. Most recently, I developed a new class for the program called Latinx Literature – an upper division course – and taught the play in class while I also directed a student production that was open to both the campus community and the public at large. About half my class showed up to the performance in support.

First and foremost, I teach The Panza Monologues because the material resonates with our student population. As the youngest institute of higher learning in San Antonio, the fastest growing in the state of Texas, and the only university on the Southside, the institution has the potential to enrich the community of primarily low-income, Mexican American residents who have been historically neglected. While both economically and educationally underserved, this community has persevered. I am proud to say that my mother’s family still lives and works and love and dies on the Southside and it is a big part of my life’s mission to contribute to bringing culturally relevant education, art, and organization to this community.

For my students, primarily Mexican origin, first generation college students, the content rings true. In no other place have they seen their experiences represented so clearly – from the site-specific descriptions of local eateries and gathering places, celebrations and market places, to the visceral descriptions of savory dishes and effortless Tex-Mex colloquialisms that are distinctive to the city and its residents, to the gut-wrenching testimonies of love, loss, hope and strength – my students get all the feels. Many of them (about 70 percent) are the first in their families to attend college and the majority are of Mexican descent. Most of them hail from San Antonio originally and because it is the most affordable university in town, it attracts a population who may not otherwise be able to afford higher education. This is not to say that attendance is cheap.

Most of them work at least part-time and benefit from financial aid packages reserved for low-income students in order to finance their education. A large number of them are bilingual, fluent in both Spanish and English, though they have been primarily educated in English while they speak Spanish at home and with friends. As I mentioned earlier, they often come from underserved communities and under-resourced schools. There is a relatively large veteran population (15 percent) as well as a significant number of students from nearby rural areas. According to a preliminary study by a small contingent of faculty members, about three-quarters of the student population is food insecure. Fortunately, that group of dedicated faculty and some hard-working staff have recently addressed this concern by opening a campus food bank which launched in the Spring semester, 2017. Many of my students work full time, are raising children, are taking care of elderly and/or ailing family members, and/or are dealing with physical and mental health issues, all while learning to navigate higher education. They speak about these challenges in the classroom when given the opportunity. And I make it a point to give them this opportunity – especially because when they are affirmed in the fact that they are not alone, they are more likely to keep moving forward and find avenues of support that will get them to the commencement stage.

Second, The Panza Monologues gives voice to the mujeres who are at the center of the Latinx community in San Anto. Women’s rights are human rights and the themes presented in this production speak to both the adversity and the fortitude of marginalized peoples, particularly women. Reproductive justice issues are central to my research and teaching because recent cuts in funding to Planned Parenthood have grossly limited women’s access to healthcare, and the material can be read in the context of the consequences of public health being directed by a myopic legislature. The Guardian recently reported that Texas has the highest maternal mortality rate in the developing world. Moreover, San Antonio is one of the most segregated cities in the United States, marked by extreme income equality that separates privilege from poverty. Gentrification is becoming the narrative of the city as many families who have lived in certain areas for generations are being forced out by rising housing costs and “improvement” plans.

Last, I chose this piece because it strikes a delicate balance between pointed social commentary and light-hearted introspection. The monologues are relatable because they tell the stories of real women whose lives are filled with laughter and tragedy, frivolity and hard labor, flexibility and endurance. When students read The Panza Monologues, they are surprised to find that their stories have been committed to the page. They are shocked that they have never heard of it before. The content resonates so strongly with them, they often laugh raucously, cry tears of empathy, often talking back to the screen when we watch the performance DVD.

How did you teach The Panza Monologues (any fun or meaningful activities or panza teaching tools you want to share)?
In all the courses I have taught this text, I assigned the full script, plus parts of the second edition. First, they write response papers. They read the script and the autogeographies prior to the screening and then we discuss individual monologues in class. Sometimes I assign them a creative project – to write their own monologues. Students have written about miscarriages, love affairs, death of loved ones, spiritual beliefs, and more. Finally, they perform monologues for the class. Some of them have seen or participated in the University’s annual production of The Vagina Monologues. They have two questions when they hear the title of the work – “Is that like Vagina Monologues?” and, “Why do they spell pansa with a z?” (Both of these questions are answered in the monologues, by the way.) When I directed a student production of The Panza Monologues in our auditorium, some of the questions I asked myself included: What does it mean to stage the play in the city of its inception? What does it mean to do this on the Southside, a historically Mexican-American and economically neglected area of town? Moreover, what are the implications of producing it at the city’s first four-year institution that caters primarily to first-generation, Mexican origin students, the majority of whom are also women? (Those percentages, respectively are roughly 71%, 66%, and 67%). What does it mean to do this without the support of either a Mexican American Studies Center, or Drama Program? How was the play transformational for the performers and the audience? What potentials does the performance have to push boundaries and awaken performers and audience members to the importance of telling women’s stories? It was an awesome experience for me, the students, the crew, and dare I say, the audience. 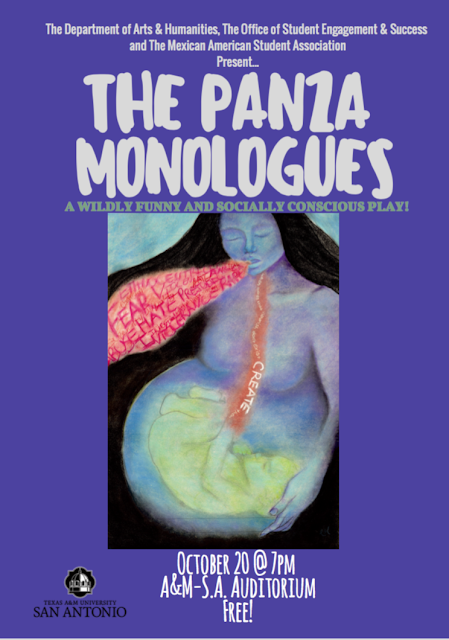 Why is The Panza Monologues important to your field of study? What
conversations/issues did the book raise?
This performance piece is crucial to the examination of Latinx and women’s theatre as well as the larger concerns of social justice literature. The Panza Monologues is a vital chapter in the narrative of San Anto. The way it came to fruition through stories and collaboration is an example of the kind of collective effort it often takes to bring about visibility and social progress.

The links between public health, women’s labor, reproductive justice, poverty, and self-love are always the most salient for my students. Almost all of them write about “My Sister’s Panza” and “Praying” as the monologues that affected them the most. Each of those monologues has to do with some type of violence being enacted upon the body.

What did you learn about your teaching or about your students from teaching The Panza Monologues?
I learn from my students every day that I am privileged to share space with them in the classroom. Teaching The Panza Monologues has afforded me the unique opportunity to learn even more about my hometown. As much as I adore the play, and as much as I relate to its content, there is always someone in class who can illuminate some aspect of the material for me and challenge me to shift my perception of the written word. Each time I return to the script with a new group of students, I learn something new because my students bring their individual experiences to the material and enthusiastically engage with it. I will be teaching The Panza Monologues for years to come. I don’t anticipate it losing its relevance anytime soon.

Favorite quote from The Panza Monologues book?
“So it was written on the bodies of Chicana heavyweights all across Aztlán. Live your life without shame. ¡Que viva la panza!”

She is an Assistant Professor of English at Texas A&M University-San Antonio where she teaches classes on Latinx and Chicanx literature, multiethnic American literature, borderlands theory, and women of color feminisms. Dr. Santos is the advisor for the A&M-SA Mexican American Student Association. She has published and spoken on issues of equity for women, immigrants, and marginalized communities. Her chapter “Performing the Panza” is forthcoming in the MLA Options for Teaching Series, Teaching Mexicana and Chicana Writers of the Twentieth Century.

And, if you teach The Panza Monologues - feel free to contact us about the possibility of a "Pedagogy of the Panza" feature for our blog.

Don't forget, you can also buy a DVD of The Panza Monologues in performance.

Enjoyed this story? Check out other "Pedagogy of the Panza" posts in this series:

Posted by The Panza Monologues at 7:42 AM No comments: