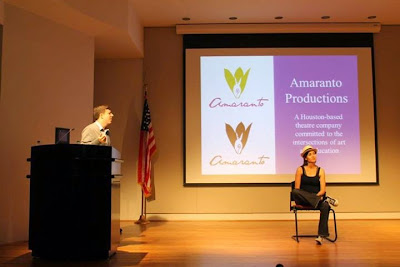 Recently, Amaranto Productions, a new Houston based theater company, created a Panza Performance-Plática of their own. Mariana Alegría co-founder and performer answers some questions from producer and co-founder Trevor Boffone about their experience bringing The Panza Monologues to a whole new audience through a Panza Performance Plática that combines scholarship, performance and dialogue.

Our occasional blog series - "DIY PANZA" - celebrates and profiles artists and their innovative use of The Panza Monologues, Second Edition in their community. This series features posts that showcase important, determined, and ingenious artists of all kinds who are taking our work to the next level of its manifestation. Are you producing The Panza Monologues in your community? We’d love to hear your story – contact us! panzapower@gmail.com 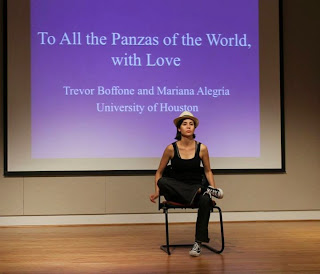 Mariana Alegría: Although I am trained in the academic world, sometimes I would much rather be acting than writing papers. One day, I saw Trevor walking around with a purple book that said “panza” on the cover. To me, that was an unspeakable word. I was so curious: who would title their play that. I didn’t know about The Panza Monologues until Trevor introduced me to it that day. I immediately fell in love with the text and never returned the book! Trevor was writing an article about the play when we decided to add the text our production company’s repertoire (Amaranto Productions). Eventually, we decided to showcase our work. We started with the toughest crowds: young college students who know how to question and challenge everything they see!


Trevor Boffone: At the NACCS Tejas Foco in February, I gave a paper about the politics of the panza and The Panza Monologues’ deep San Anto roots and asked Mariana to perform “The Prologue” to accompany my talk. A week later, Stalina Villarreal, Director of Mexican-American and Latina/o Studies at Houston Community College-Southeast, invited us to perform a fleshed-out version of what we presented at NACCS Tejas Foco at her campus. We developed "To All the Panzas of the World, with Love, a Panza Performance Plática," to embody the intersections of performance and scholarship, art and education, theatricality and textuality that our program facilitates. After I introduced The Panza Monologues, Mariana performed “The Prologue” and a new version of “Sucking It In.” Not that there is anything wrong with “Sucking It In” as written in the published text, but Mariana’s version used the idea of the panza pliers and adapted the work to fit her own body, and thus created her very own panza story during the creative process. After Mariana’s performance, I gave a (not-too-academic) lecture about the piece followed by a reading of “My Sister’s Panza.” Originally, Mariana wanted to do the piece, but during rehearsals, we decided to adapt the monologue as a scene in which we both spoke about our sister’s struggle with love, loss, and diabetes. Our performance bridged female and male, Latina and Anglo, Spanish and English, and offered future possibilities of The Panza Monologues as an adaptable community-engaged work that can meet the needs of a variety of groups.


Mariana: My inspiration was the fact that we all have a panza, no matter the size, no matter our history with it. We all have an undiscovered source of power in our panzas—however, this same source of power, can become the origin of suffering. So, my inspiration was that I pictured a character that would go to any length to fit in, not only fit into her size double zero jeans, but to “fit in,” both emotionally and physically to society’s standards. In the end, although the character struggles with this, she finds in the pair of pliers her way to negotiate, to deal, with her struggle. I wanted my character to be a little oblivious to that and for the audience to understand her struggle and see themselves in her excessive methods to feel beauty. Because at the end of the day, I made my character feel beautiful after all the struggling to “pull those jeans up.”

Trevor: What did you learn about yourself as an actor tapping into your panza politics? 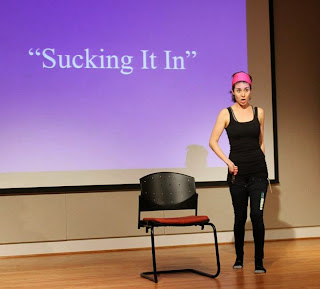 Mariana: That’s interesting because a member of the audience asked me why I chose to do this piece and these monologues even though, according to him, I have a “concave panza.” I learned a lot due to the fact that I, as a person, have struggled with eating disorders and low self-esteem. So, for me, to find various characters at different stages and relationships with their panzas helped me as a performer to connect to a place of power but also to a place that the text allows to be actualized. Ultimately, as a performer I took the power away from this man in the audience and channeled it through my body to speak truths about contemporary womanhood. I took ownership of my truths and presented an authentic portrayal of my struggles with my body image and self-esteem.

Trevor: What piece did you connect with most? 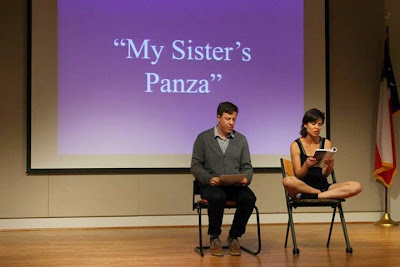 Mariana: The piece I connected the most to as an actor was “My Sister’s Panza.” It made me write my own panza story because I could personally relate to that story. Sometimes we let people take away all the power of our panzas, and I have been through the struggle of losing it, making my panza suffer because of someone who made me feel like I wasn’t enough—not beautiful enough, not skinny enough, not successful enough, not smart enough, not good enough. And it was a long road to realize that I am more than enough. But that road was… is… was… painful. It is painful. And it is a never-ending process. I think anyone in the world can relate to that no matter their gender, sexual orientation, political standpoint, etc.

Trevor: What panza positive performance advice do you have to share with future actors of The Panza Monologues?

Mariana: Before going into rehearsal it helps if you understand your own relationship with your panza and its story. You need to know the story of your panza because as Irma and Vicki say “When you listen to the panzas of all the mujeres out there, you can hear the world according to women. That’s the power of a panza story.” In order to perform the stories of other women’s panzas, one has to be connected with their own story beforehand. Also, in acting we learn that your core is the center of all emotions. Therefore, connect to your panza! Conecta con tu centro. And don’t be self-conscious about the size of your panza. We all have a panza and that’s what matters.

Trevor: What is your favorite quote from The Panza Monologues?

Mariana: “…before you can get to the battle of the chocha, we have another score to settle, another place on our beautiful bodies to baptize, actualize, a place that had been demonized, sterilized, starved, stuffed, covered over.”  This quote is very relevant because as women we sometimes think of our sexuality as our source of power but if you think about it our panzas are a much more politicized place and highly demonized source of power that we still have to explore.

About Mariana Alegria: Mariana Alegría is a performer and co-founder of Amaranto Productions. Mariana is currently a double-degree Ph.D. candidate in Hispanic Studies and Arts Leadership at the University of Houston where she is also a Fulbright Alumni and holds a Graduate Certificate in Women’s, Gender, and Sexuality Studies. She has an MA in Acting from the Birmingham School of Acting in the United Kingdom, a BA in Latin American Literature from the Universidad Iberoamericana, and a degree in acting from the Centro de Artes Dramáticas (CADAC) in Coyoacán, Mexico City. Her passion for acting has always complimented her passion for writing. She has directed and starred in a number of plays in Houston, Mexico City, and England, and is currently researching the state of Chicana feminist theatre in the United States, acting in solo performances, and working on her dissertation, as well as writing her own plays. 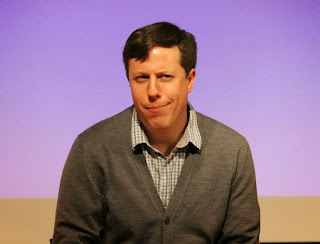 About Trevor Boffone: Trevor Boffone is a Ph.D. candidate in the Department of Hispanic Studies at the University of Houston. He researches the intersections of gender, sexuality, and space in Chican@ and Latin@ Teatro and cultural production. His dissertation research is a study of theater and performance in East Los Angeles, focusing primarily on Josefina López’s role as a playwright, mentor, and community leader in Boyle Heights at CASA 0101 Theater. He has published and presented original research on Chicana Feminist Teatro, the body in performance, Queer Latinidad, as well as the theater of Adelina Anthony, Nilo Cruz, Virginia Grise, Josefina López, Cherríe Moraga, Monica Palacios, Carmen Peláez, and Estela Portillo-Trambley. He recently served as a Research Fellow at LLILAS Benson Latin American Studies and Collections for his project Bridging Women in Mexican-American Theater from Villalongín to Tafolla (1848-2014).